Danny is a second-year undergraduate at Nottingham Trent University. Here are his tips on finding and settling in a student house.

Most people live in university halls in their first year, and then move into a house with their group of friends. It sounds like a simple process, however, navigating the sticky mess of admin fees and deposits can be quite difficult. Here are some tips for new student-renters to make the process a little easier.

Be prepared for deposits

Dropping £300 to £500 is often a feat unimaginable for students, at least it was for me! It’s a lot of money. However, you’re going to want to pay it as soon as possible, as you can’t secure the house with just an email or an admin fee.

Most students use their overdraft for this, but if you don’t have one or it’s at max, you’ll need to find another way to find the money. It’s not uncommon for students to borrow the deposit from the more financially stable members of the house and pay them back on the arrival of the next loan payment.

Ensure you take photos of everything

You will have no issue with most landlords, but some private landlords can have a bad reputation. Make sure you take pictures before you move in, this will give you the evidence of the state the house was in when they took your deposit. Take photos of everything even down to blue tack marks on the wall! If your landlord tries to then withhold your deposit for damages that existed before you moved in, you can dispute this.

Make sure you get everything in some form of writing too. I’ve heard of students being told verbally that bills where included in the contract, only for this not to be the case upon signing the contract. Contracts contain very important information on both what you can and can’t do in the house, and what to do if something goes wrong. Not reading the contract often leads to students dismissing what they are liable for – like lightbulbs! So, read the contract or have someone else read it.

Remember you have neighbours

Coming from halls, it can be quite easy to forget you will have normal, working neighbours. If you intend on playing music loud deep into the night, be prepared for noise complaints.

It’s important, so simply be considerate! Let your neighbours know if you’re having a party in advance, it’ll give them a chance to get some ear plugs early on. 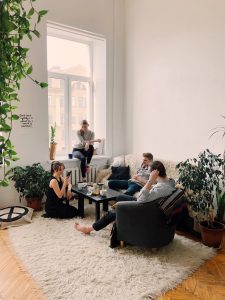 Be sure of your friends

It may sound rather silly, but far too often you hear of resentment between housemates! Be sure you can spend days at a time in their company. Even the slightest hint of annoyance will grow exponentially as you spend more and more time with them, so be sure of your friends!

On a slightly more sinister note, there are cases of housemates stealing from one another. Nobody expects it, but you need to be wary and vigilant.