If like me, you graduated in the last millennium, you can be forgiven for being confused by the many different labels applied to university level qualifications. Add to this the fact that you can now study for a degree at a local college and/or through an apprenticeship and you can end up baffled. This useful guide should help to demystify the current system whilst challenging some of the long-held snobbery about the different types of institutions. 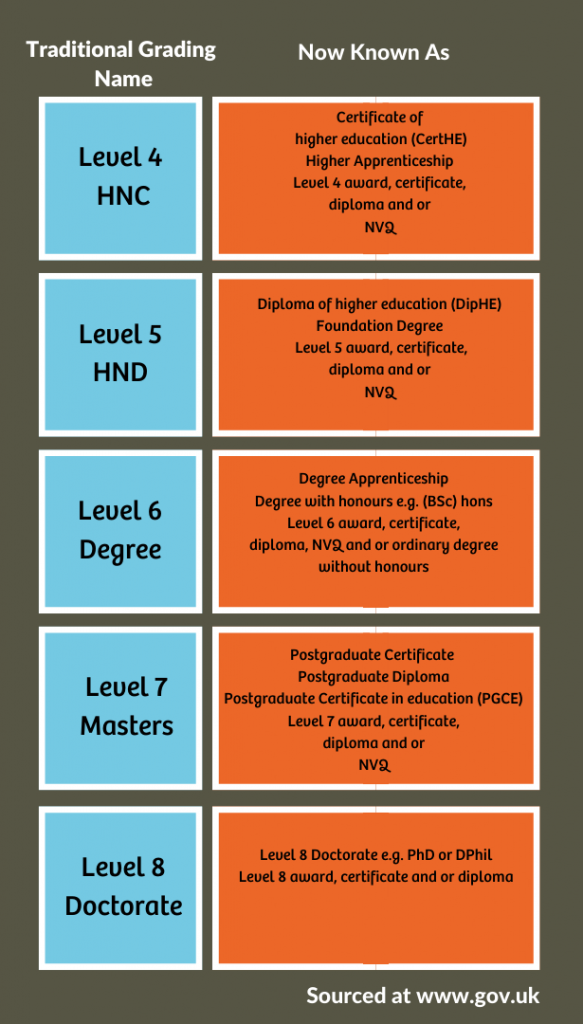 Each level can be awarded as an award, certificate, diploma or NVQ award.  What this means is that qualifications holders have studied to some extent at this level and have been given an award to recognise this.  For example, a Level 6 Certificate may be awarded to a student who has not completed the full 3-year degree but has been given a certificate to recognise the study that has been completed.

Being awarded an apprenticeship at a given level is equivalent to full university study at that level.  Many employers are choosing to offer degree level apprenticeships in place of sponsoring or offering bursaries.  School leavers can start in the workplace sooner, earn a salary and not get into the high levels of student debt that the more traditional route affords. The degrees are underwritten and awarded by local universities or FE colleges and should be recognised by future employers at the same level as any other degree. Many universities are now providing Degree Apprenticeship programmes for smaller employers either using Levy funding or 95% or even 100% funding for non-levy payers.

Recognised professional qualifications will also be referred to using the numbered levels. For example, a Level 5 Certification awarded by the CIPD is a qualification equivalent to an HND (not quite a full degree).

Whilst many students will undertake a master’s immediately following their Bachelors, it is not uncommon for employees to return to university part time to complete their postgraduate studies. This is sometimes sponsored by an employer but more often, an individual may decide to pursue further study to either change career or further their own career.

Increasingly, universities are now also offering Undergraduate or Integrated Masters courses. These are four-year degrees, bolting on the additional Masters year from the outset. This type of degree is most common in engineering disciplines with more traditional universities.

A Level 7 qualifications certificate awarded by a professional institute demonstrates that the holder of the award has studied at a master’s level.